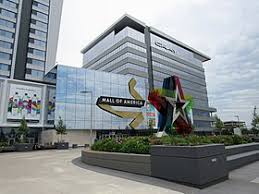 This was my second time here but Suzi J’s first time. This time we spent a good amount of time exploring the biggest mall in America.

As part of our yearly New Orleans Saints road trip, we took this opportunity to see what all the talk is about this large indoor shopping and entertainment center. We stayed across the street from the mall, which is close to the airport. Doing this allowed us to walk across the street to the mall, where there was also a light rail station that took us downtown.

The mall is located in Bloomington which is a suburb of the twin cities. There didn’t seem to be much to do other than the mall here, but the mall has several restaurants, an amusement park (Nickelodeon Park), an aquarium and plenty of stores. We didn’t do the aquarium, but it seemed pretty cool from what we heard. We did the flight across America ride which was like Soarin at Epcot (they also have the flight across Canada for our friends to the north). I had done the roller coasters there in 2010, which are pretty cool for an indoor park.

The mall was built on the site of the old Metropolitan Stadium where the Vikings and the Twins played. In the middle of the theme park, there is a bronze home plate exactly where the plate was for the stadium.

There are so many stores in this mall, it would take a day or 2 to see them all. Plenty of food choices as well, both food court and sit down. The mall has weekly events so check the site to see what is going on at the mall. This would be a cool 2 day trip for a family with kids.

Thanks for visiting – Arty & Suzi

The Wicked Explorers on FB

The Wicked Explorers on FB